0 comments
May 22, 2015
Food     Restaurants
Yet another restaurant opens on London’s trendy Brick Lane, but is it any good? Well here’s my two pence worth of Efes, a halal Turkish restaurant. 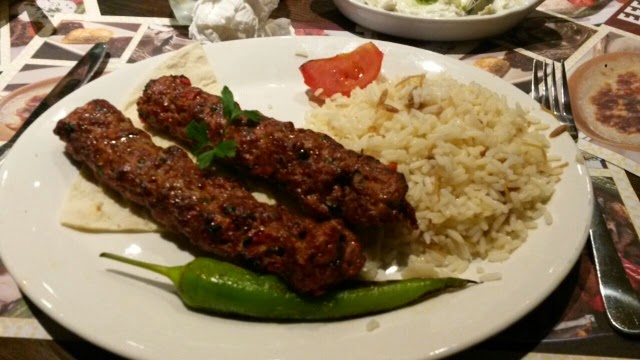 I recently visited the Efes Turkish restaurant, which had barely opened it’s doors to the public.

There’s another branch of Efes restaurant a mile up the road in Mile End, which I’ve wanted to attend, but never got round to it. It was a bit of a walk, but not worthy of a drive, so the lazy Londoner in me never quite got round to going there.
So with the new and shiny Efes restaurant practically on my doorstep, there was no excuse not to visit.
Now if you’ve not tried Turkish cuisine before, let me give you a 101, the starters often consist of pastry filled goodies, hummus, and yoghurt dips. The mains are meat laden, often in kebab form. Aubergine and chickpeas also often feature as the veg options.
In my experience, I prefer Turkish starters to mains, as they often tend to be more flavoursome. This was certainly the case when I visited London’s Tas restaurant (read my review here).
However, in Efes, it’s all about the mains, with a few starters thrown into the mix.
But before I launch into the food, let me tell you my first impressions of the restaurant itself.
Efes is beautifully brightly lit with gold and black decor. Unlike many restaurants, which opt for dimly lit romantic opulence, Efes is a ray of sunshine with large windows to boot. Being able to see directly into the restaurant was a shrewd marketing move which could have backfired had the place not been bustling with diners since it’s opening.
One criticism of the design of the place is the takeaway-style menu behind the counter. I’m not sure if it’s a nod to kebab-houses, or just simply to entice take-away orders. Either way, it felt out of place in a sit-down restaurant.
There are two floors for dining, so there’s plenty of space. It’s also great for groups – we were in a group of six and were placed in a round table which allowed for mingling.
I would also say that Turkish, like middle eastern food, is made for group dining in general, as it’s mezze style dishes are meant for sharing.
As the restaurant had barely been open a week at the time of dining there, there were a few teething troubles, as service was a little slow. But we were seated straight away – quite the feat considering it’s a large group on a Friday night.

But onto the good stuff, here’s some of what we had: 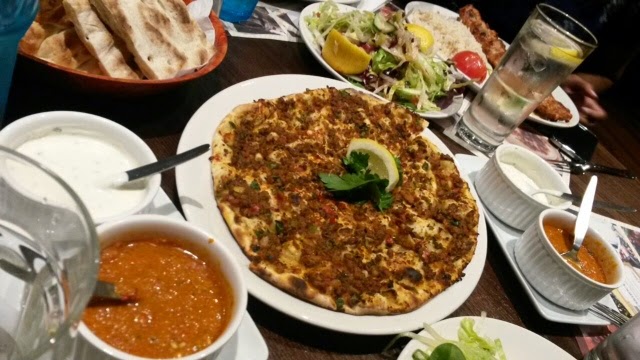 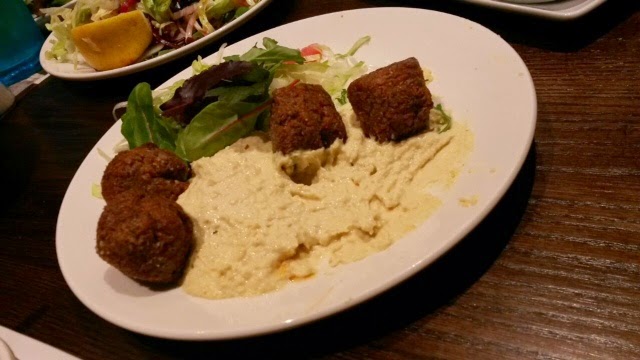 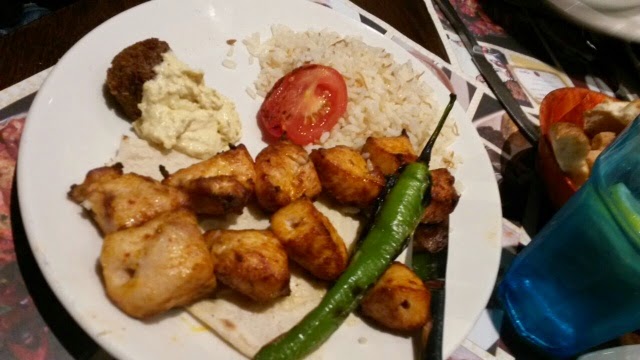 Now as mentioned, there weren’t a great variety of starters to choose from, which meant that we opted for more mains. However, the starters we did have were pretty decent.
The falafel, though small, had a generous helping of hummus, which was a bonus. The yoghurt dip was a treat with its succulent pieces of aubergine.
The mains did indeed seem to be variations of different cuts of meat. They were mainly in kebab form, served with either rice or bread.
I often find such dishes dry, so I was pleased to see a kebab roll option with yoghurt, which added some much needed texture. Also the meat was the right cut for me. I cannot stomach donner kebab so much prefer proper pieces of meat.
I unfortunately got too full to try much of my friends dishes. However they all looked fairly appealing. I do feel though that I had the best dish purely because of the yoghurt-y moisture.
We were offered complimentary black tea.  It was a little strong for my liking, though my friends loved it. I’m not sure if that’s a regular thing or just an offer be used they’re new, but it was a nice gesture nonetheless.
Customary to Turkish dining, we were also given some complimentary pistachio Turkish delight, which was delicious.
One note I would say however is that I wouldn’t order a main for myself again. I’d more likely share a main and order a couple of starters.
But most importantly I would go again as the food was good quality. It’s also got a great location at the foot of Brick Lane, and it provides a lively atmosphere.

Efes restaurant in a nutshell

Price – Around £12-14 for mains, £5 mark for starters including sauces.
Halal – Yes
Great if… You want a Turkish dining experience and like your meat
Not so great if… You prefer an abundance of starters over your mains. Head over to the Lebanese at Edgeware Road for that.