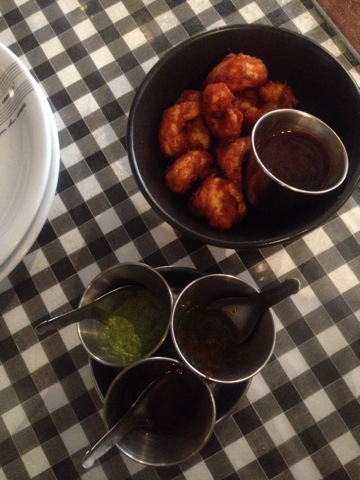 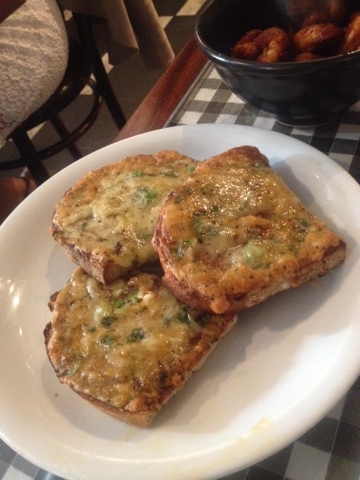 Now I’ve tried a few Indian restaurants in London, of varying prices and quality. When I first moved to the Capital in 2012, I’d visited Dishoom restaurant, a trendy Bombay style cafe which harks back to the old Bollywood era.
However, I visited the branch in Covent Garden for a birthday party, arrived late and ate from the set menu. My experience wasn’t great. I had a couple of pieces of toast with keema (mince), some other oily curry and the most pretentious, unpalatable dessert called kala kata gola ice, a weird frozen concoction made with black salt.
So overall, my first impression of Dishoom was style over substance, which is sadly the case for a lot of restaurants in London. I always held the view that the best, most authentic Indian restaurants are not in the trendy hotspots such as Covent Garden or Knightsbridge, but tucked away in the nooks, crannies and outskirts of the city.
However many friends assured me that my Dishoom experience was the exception rather than the norm, and that the restaurant does in fact serve good food. I was also advised that their other branch, in equally trendy Shoreditch, East London is much better.

So I decided to give Dishoom another try and headed to their Shoreditch branch, and happily had a much better experience.
Firstly, let me start with the decor and atmosphere. As we rushed in late to the Covent Garden shindig, there was precious little time to appraise the setting.
But as my Shoreditch experience was slightly more leisurely, and we had a short wait for our table, I had a chance to nosey around. 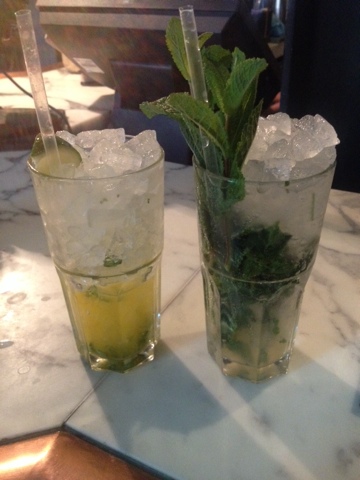 It was Saturday night, and Dishoom was packed, but in a good way. There is an outdoor veranda and shisha area, and inside there’s a bar where you can wait for your table. The lovely atmosphere makes for a great evening, though perhaps not a quite intimate dinner.

The waiters dart around the tables which are fairly close together. We were advised on arrival that it was café-style service, which basically meant they’d serve each dish as it came out of the kitchen, rather than the traditional and uniform starter, followed by main, order.

The menu was refreshingly quirky, with street food and fusion variations to boot. While many Indian restaurants offer standard fayre such as chicken jalfrezi, veg curry and dopiaza, Dishoom offers a refreshing twist with dishes such as masala chilli cheese on toast.

So here’s what we had… 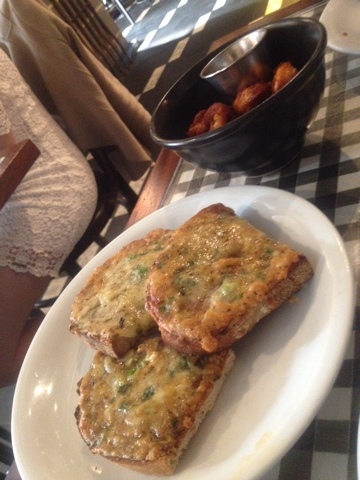 The chilli cheese on toast was divine. It was like Welsh rarebit with an Asian twist.  The chillies were just the right heat, and while it was ultimately cheese on toast, it was good. Which is why I attempted to emulate this with one of my recipes. 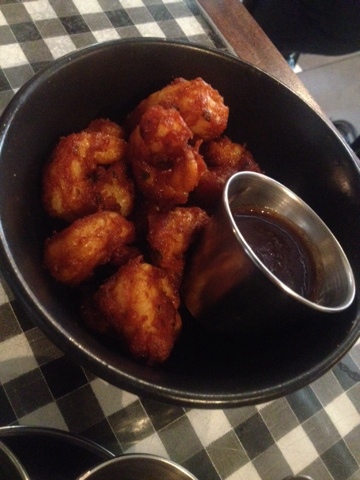 The prawns koliwada were also a hot, with their crispy chilli coating, the prawns – one of my favourite seafood dishes were a great starter and went well the with chutneys accompaniments.

The biryani was a delicious blend of old basmati rice (in this sense old is a good thing) and didn’t have too much oil, unlike the biryani I had in Trishna restaurant. 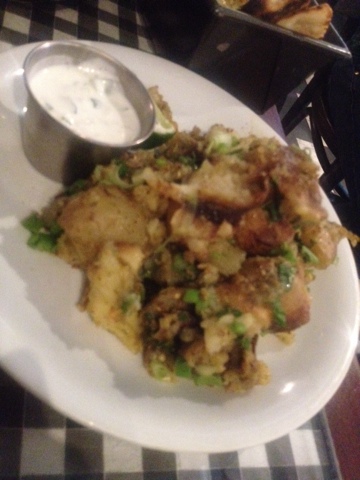 The gunpowder potatoes was a nice variation from our usual accompaniments. It was essentially smashed up potatoes with skin on and garnished with spring onions, but it worked. The onions added an unusual zing to any other potato dishes I had, which would normally contain the standard white onions.

I wasn’t a huge fan of the chicken tikka we ordered, as it had a sweet vinegar taste and went against my preference for a spicy, or at least savoury curry.
As we’d ordered biryani, we didn’t bother with extra rice, but instead had a two breads in the form of naan and roti (chapatti). The roti was particularly special as it was a rather large, and very thin square bread
rather than the usual round shape. This lighter texture went well with the potato dish, while the thicker, heavier naan was perfect for mopping up the chicken.
So overall, this Dishoom experience was much better second time around at the Shoreditch restaurant. And based on this experience, I’d happily recommend it.

Dishoom in a nutshell

Halal: Chicken is halal, though they do serve pork dishes.
Price: Starters under £6. Mains vary from £7-£12.
Great if… you want a lively evening in a bustling atmosphere in East London.  Dishoom is also great for groups.
Not so great if… you want a quite supper in a more formal, structured setting. 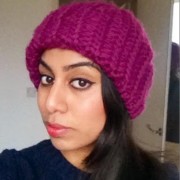