1 comment
May 30, 2014
Food     Restaurants
My Sanam Indian Restaurant buffet review explores the dishes offered by the new all-you-can eat contender in Manchester.
Now there’s something you should know about me, I just love a good buffet.  Yes, I know all-you-can-eat can only end badly.  At best, you can’t overeat and feel like you haven’t got your money’s worth.  At
worst, you can overeat, and are left feeling uncomfortably sick and bloated for a week.
I usually sway towards the middle.  I load up on starters and always get too full to appreciate the mains.
However, with the memory of a gnat, I still go back time and again for my starter-laden meal.  Why?
Buffets for me are a great way of trying a bit of everything.  You’re never left in that awful situation of
making a poor meal choice.  You never spend the rest of the night envying the plates of others.  You can load up on salad, have a scoop of each ice-cream flavour (and cake, if you’ve got room for it) and then go back for a main as your dessert.
That’s right, the buffet is very much the poor-woman’s taster menu.
I also feel that Manchester is one of the best cities for a buffet.  Now I say that because I lived there for years, and I am yet to be proven wrong.
I recently ate at one of my fail-safes – an Indian buffet at Sanam Indian Restaurant buffet in Longsight, Manchester. At a cost of £10, the buffet is a cheap and cheerful treat.
For those not from Manchester, Sanam Restaurant is one of the oldest establishments in the famous curry mile.
While other restaurants have been and gone, Sanam has stood the test of time.  Family-owned, in the last year one of the brother’s branched out and opened the Sanam Indian Restaurant buffet in Longsight, offering an all you can eat menu.

Since then, it has become a dead-cert for eating out in Manchester.

As always, I load up on the starters, but they are soooo good that it’s worth it.  From aloo tikka (potato cakes) to seekh kebabs and chicken tikka, you’re not short of options. 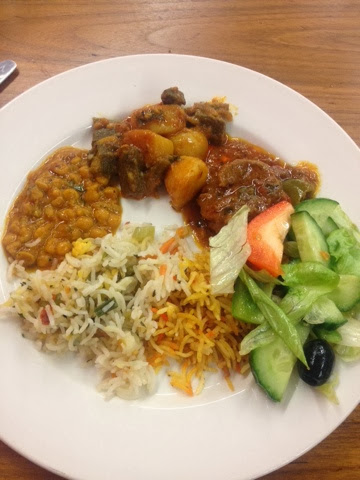 Another thing I really like about Sanam’s buffet is that they have an extensive salad selection. I’m a sucker for a good salad, and rather than offering some obligatory lettuce and tomato, Sanam has an extensive and fresh salad bar which boasts Russian salad, spiced chickpeas, olives and a selection of yoghurts and dips.  I stock up on salad as a way of off-setting the grease of the starters themselves.

As well as Indian food, Sanam does offer very basic junk food such as pizza and chips, but these are very much a sideshow to the Indian dishes, which of course they do best.

However, a really nice surprise was the oriental sweet and spicy chicken soup.  The soup was very spicy and flavoursome, but the chef avoided going down the ‘Indian’ route, and kept the flavours very oriental.  For a place that does Indian food well, this was a nice and unexpected addition.
Typically, I did get my fill of starters, which meant I couldn’t fully appreciate the mains.  However, I
do think that the starters are the best part of an Indian meal, though next time I have a buffet I may attempt to mix it up and have my main first – now that’s a novel idea!
Despite my fullness, I had some nice daal and lamb curry with potatoes.  Oh, and then I had a couple of scoops of ice cream that I couldn’t finish, though not for want of trying.  Again, the Sanam Indian Restaurant buffet offers a couple of cake options, ice-cream and traditional Asian desserts such as gulab -jamon and rice pudding.
I have to also mention the service at Sanam.  Perhaps it’s because it was a quiet weekday, but I was really impressed by the speed of service.  Plates were cleared as soon as we got up for the next course. We weren’t expected to re-use the same plate each time. The manager even poured my soup and brought it to my table (he saw my hands full with a plate of starters). I don’t want to tar all establishments, but this hospitality and care is usually lacking in many ‘curry in a hurry’ buffets.
One criticism I would make is that buffet mains are never as good as off-the menu.  So if you do want
a nice quality main dish and are less fussed about tasting every starter on offer, you may want to go for a traditional sit down and serve restaurant.
However, Sanam restaurant is great for group parties, as there’s no fussing or dithering over the menu or fighting over the bill.  I booked it out for a party of 25, and it was great, everyone can quite simply have everything.
Also, if you want to try as much as you can for a tenner, then Sanam Indian Restaurant buffet is worth a look.

Cost – £9.95 per head.
Halal – Yes.  Limited options for vegetarians.
Great if… you’re eating in a large group, though pre-booking is required.
Not so great if… you’re not a buffet fan.

Read: For a tapas experience in Manchester, read my review of La Cantina here.

Read: For a world buffet in London, check out my review of JRC World buffet