0 comments
July 14, 2014
Food     Recipes
Sick of spicy, oily deep fried snacks this Ramadan? The you’ll want to try this.  My cheese potato and sweetcorn pasty recipe involves no frying. But it is a little bit naughty. It’s basically a homemade pasty, made with Jus-Rol pastry. It couldn’t be easier, as after all, who wants to spend hours cooking whilst fasting? Anyway the pasty’s went down a storm, and were a great antidote to the usual spicy fayre, so I thought I’d share the recipe. So to make these quick and delicious savoury treats, see below…

Part-boil the potatoes (this should take around 5 minutes max).The idea is not to let them fully boil as they should be slightly firm.
Finely dice an onion.Ideally, they should be smaller than the potatoes.
In a bowl combine the onion, sweetcorn, grated cheese and boiled potatoes.Add salt and pepper to season.Leave aside.
Next, Tear of a lump of the Jur-Rol pastry and roll into a ball about 2cm in diameter (though it doesn’t have to be exact!)
Roll out the ball of pastry into an circle or oval, again it doesn’t have to be perfect.
Fill one half of the oval/circle with the filling, but leave enough room around the filling to seal the edges.
Take the half of the oval which doesn’t have filling, and fold over to the other side, sealing the edges by pressing your fingers into the dough.
Finally, bake in the oven for about 15-20 minutes until golden (optional – you can brush the pastie with margarine or milk to make it extra golden on top). 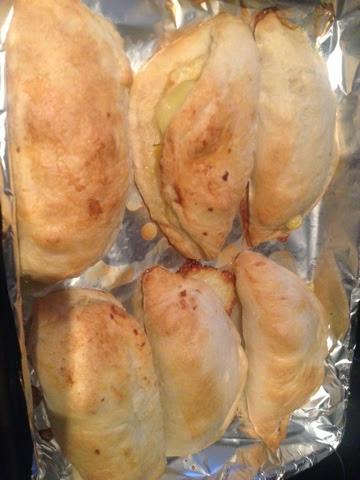 Now if you really MUST have a deep fried snack, the filling also works just as well in a samosa made of spring roll pastry.  See my recipe and method for this here.